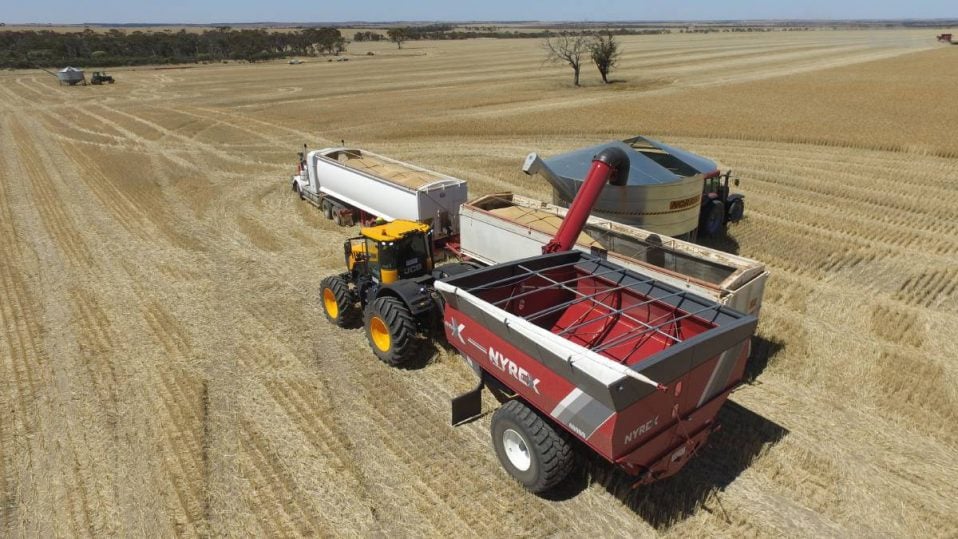 The JCB Fastrac 8330 in action as a chase tractor during a recent demonstration held by Boekeman Machinery, Dalwallinu. This new model is regarded as the ideal for year-round use in spraying, spreading, tillage, hay-making and chasing.

YOU could say it’s a Back to the Future moment in agriculture.

When tractors first came on the scene, they quickly became the year-round workhorse, inevitably sporting a front-end loader and a rear-hitch for a range of farms tasks.

Roll on 60 or 70 years and year-round tractors are back on the agenda.

For a variety of reasons – including switching to controlled traffic farming and reducing the seeding bar width to 12.2 metres – medium-powered tractors are gaining a lot more appeal.

They’ve got grunt, they’re fuel efficient, they’re quicker on the roads and they’re got all the bells and whistles (if you want all the options).

But one reason stood out above the rest during recent demonstrations by Boekeman Machinery of the latest JCB Fastrac 8330 model.

“It was by the far the most quoted by guys who drove it.

“A lot of guys were genuinely surprised how comfortable it was to operate particularly with the multi-link suspension (fitted front and rear).

“It has a new feature, called Rapid Steer, which reduces lock-to-lock turns from four to two and helps in faster headland turns.

“We set it up as a chase tractor towing a 32 tonne Nyrex chaser bin and we got some really great feedback on its performance.

“There already is good inquiry, so I’m confident we’ll do some good business in 2019.

“It ticks all the boxes as a great utility tractor.”

Mr Mitchell said the 8330 came standard with a three-year or 3000 hour bumper to bumper warranty and the option to install a John Deere electro-over-hydraulic steering kit for guidance.

“You can order it with three metre centres,” he said.

The Fastrac 8330’s clever configuration is based around the now traditional four-wheel suspension and high on-road speeds unveiled in 1990.

Features include ABS braking, a new fail-safe hydraulic steering system and a 14 per cent power increase over the earlier 8310 model.

The CVT transmission incorporates a clutch and emergency steering pump and a wide selection of control modes.

High range for road use offers four modes, while low range for paddock work and speeds to 40 kilometres an hour offers seven modes, including three for cruise control.

The operator can choose the mode to set optimum engine and transmission settings for power and economy, as well as constant settings for PTO or road speeds.

The system can operate automatically for seamless step changes or manually to emulate a powershift drive.

This feature is unique and attractive to operators with limited experience with stepless transmissions.

The unit is powered by a six cylinder Sisu 8.4 litre twin turbo, Tier 4 final engine with SCR and a DEF system cleverly hidden in the exhaust system that sits out of sight behind the cabin’s rear pillar.

The driving seat has a 70 degree rotation – 20o left and 50o to the right for easy implement viewing.

Pressure and flow between both hydraulic systems is monitored and if a hose failure occurs, the flow is instantly switched to maintain control.

“This 8330 also provides significantly more power than the outgoing model and as much as 10pc more torque than its predecessor,” Mr Jeffrey said.

The new power has been coupled to a CVT transmission and front and rear axles have been upgraded to make it factory capable of running a 3m track for controlled traffic.

“The weight balance more often than not means the Fastrac does not have to carry front weights to offset implements.” 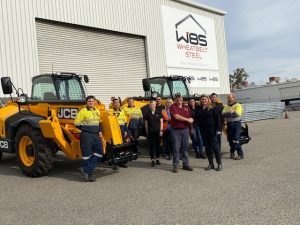 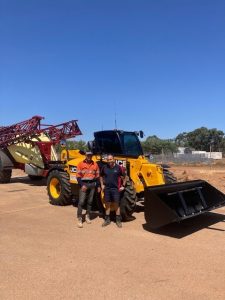