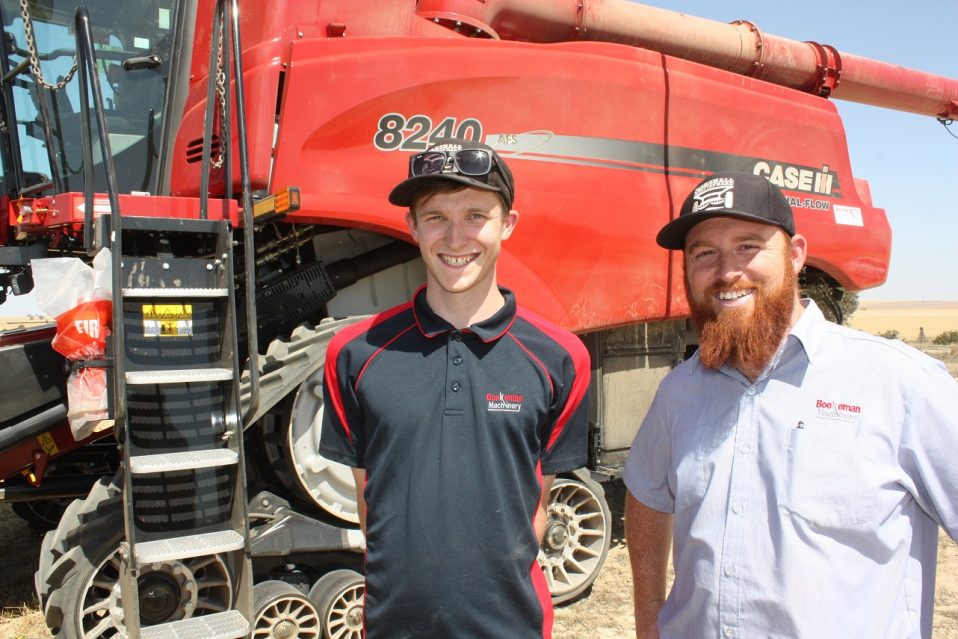 IT wasn’t the latest model but it did the job as Boekeman Machinery, Wongan Hills, last week successfully demonstrated an 8240 combine harvester on tracks, complete with a new fire suppression  system.

“We wanted to demo a header on the new Case IH suspended tracks and the 8240 fitted the bill,” branch salesman Dillan Elliott said. “We didn’t have tracks on any of the new models we had in stock.

“It is probably one of the last 8240s in Australia on tracks and it made sense to use it rather than kitting up a new 8250.”

Apart from the suspension, the 71 centimetre-wide (28.5 inches) tracks are made by Camso and feature auto-tensioning.

During the demonstrations, driver comments reflected the smooth ride and grip of the tracks.

“It was very noticeable how stable the front was,” one driver said. “With tyres you can get quite a bit of bounce which can make it difficult harvesting low.”

The fire suppression system is the result of a partnership between Case IH and engineering group Sandvik.

It comprises a cylinder filled with fire retardant foam – mounted in the engine bay underneath the discharge auger – with 12 nozzles fixed to aim at ‘danger points’.

The addition of the fire retardant system will obviously raise the subject of discounted insurance premiums.

While the 8240 is a run-out model, Mr Elliott said it still was one of the most attractively-priced tracked headers on the market.

“The new 8250 comes with optional Harvest Command automation, revised 2 – speed transmissionand has a beefier feeder chain but the 40 holds up with a 12.9 litre diesel engine developing 480 horsepower (358kW) with a boost to 555hp (414kW),” he said.

“So while it’s a Class 8 it sits on the fringe of a Class 9 and has a lot of good features that make it value for money.”

This is enhanced by a 75cm (30in) AFX CVT-driven rotor and a 50 per cent reduction in belts and chains.

An auger extension with pivoting head is standard on these models to cater for controlled traffic farming, with a discharge rate of 159 litres a second.

According to Mr Couchi, the D145 is finding a growing market with owners of higher horsepower headers.

“There’s an obvious advantage in having a wider front to increase capacity in the bigger class nines and tens,” he said.

The D145 is lighter than most conventional drapers, is equipped with retractable fingers and in-cab draper speed control and comes with a larger and stronger reversing clutch with easier adjustment of the drive chains.

The 8240 was also demonstrated with RTK guidance and telematics. 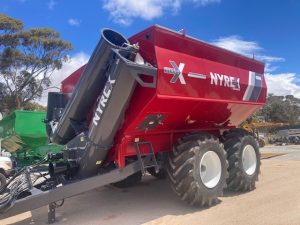 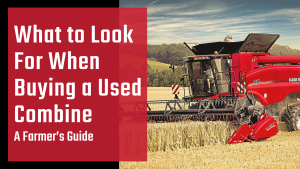